Dean Talk No. 12: The Importance of Student Loan and the Future of Thailand

Thailand’s economic development in the past five decades has been enforcing through the conviction that “Growth is good for poverty reduction”. Although the country gained approximately 5-6% of growth each year, it should be noticed that income ineqaulity has been increasing in the past three decades. Thailand has been facing ineqaulities in several forms; the rich against the poor and the urban versus the rural. Based on a number of studies, for example, recent research from the Thailand Development Research Institute (TDRI) (National Statistical Office, 2016), Korbsak Phutrakul (2013), Moreli, Smeeding and Thomson (2015), Alvaredo and Gasparini (2015), indicate that Thailand’s social disparity is at the same level with Latin American countries and getting worse each year. In the recent decade, evidences show that the top tier in the country share 10% of income (was 1 % in the last decade). Social inequalities, I argue, could be seen, at least, in three major categories.

1) Thailand’s economic development policies in the past decades paved the way for economic inequality because they promoted industrialisation that centralised only to some limited areas especially Bangkok, the Capital city, and the suburban in central and eastern of Thailand. 2) Equality in terms of wage and salary also take place due to the increasing in high-technology machine and skilled labour. This led the market demands for more skilled labour i.e. those who are approved by formal education system. However, for those who earned higher degree requires a high salary, while migrant workers from neighbour countries do not complain for their wages. In addition, the weakness of Thai trade unions has resulted in lacking of labour negotiation to the employer.  3) There is also the spatial inequality. Local administration in each provinces have been facing inequality of their income based on taxes. It is found that only big industrial cities could gain higher tax revenue. Even in a province itself, inequality of tax revenue happens in different level of local administrations. 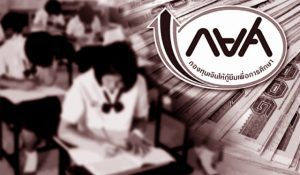 The new study of Direk Pattamasiriwat (2016) considers inequality in juvenile education using the concept of Mauro Baranzini (1991) on Human Capital. This concept focuses on the importance of educational level, work experience, size of business, conditions of urban and rural areas, and the Extended Life Cycle Model (which including love and concernedness for family and heritage transferring culture). This study, following mentioned factors, found that althought a number of students attending to formal education system have been increasing, less number of students could get into higher education because of variety of inequalities; urban-rural condition, rich-poor family. Opportunity for inferior groups is, of course, the Student Loan Scheme.

Student Loan is a handicap for the inferior offered by the State in order for them to gain access to higher education. They can develop themselves and being skilled labours that could involve in economic development in the globalised future. Even the loan could pay a small amount of money, but for those who are in the inferior status this small amount of loan is really significant for them.

The Student Loan Scheme has now been facing the lack of financial liquidity due to a high amount of non-returning loans. However,

the problem is not only comes from the loanee, but also from the ineffective system of loan enforcement. In adition, the problem of non-returning loans indirectly occur because of the national economic downturn. Based on the data of the Thailand National Statistical Office, Thailand in 2016 has 55.50 million of labour force but those who is employed is only 37.61 million and 3.97 hundred thousand are unemployed. More than hundred thousand never had a job before. There are 2.25 hundred thousand of unemployed who had experiences and 0.97 hundred thousand worked in the service and commercial sector, 0.85 hundred thousand were in production sector, and 0.43 hundred thousand were in agricultural sector. The percentage of unemployed has lifted up as 0.7%, 0.8%, and 0.9% of population from 2013 to 2015 respectively. These economic indicators indicate the failure of government policies and resulted to non-returning loans and economic inequality. These problems can be seen as a vicious cycle that is difficult to escape.

I would like to point out that the root cause of social and political problems in Thailand is social inequality/disparity. This is a deep and ongoing problem. Ineffective administration and old-fashioned development policies from the lack of vision leader do not engage the new generation to be capacity and skilled enterprise.

As the Dean of the Faculty of Social Sciences, I wish all parents and students to overcome this social and economic crises. I insist that the Student Loan Scheme is really important in order to develop both the student and this country.

translated from Thai by Dr.Watcharabon Buddharaksa
Associate Dean for Research and Innovation